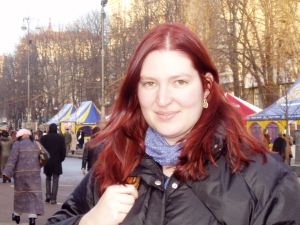 This picture was taken in December 2004 in Kyiv, Ukraine, on the day I took the oath and became a Peace Corps Volunteer.

This Journal, and the Lightyellow website, began in 2004, when I accepted an invitation to become a Peace Corps Volunteer in Ukraine. I went to Ukraine as a Trainee in September of that year, and was sworn in as a Volunteer in December 2004. For the next two years, lived in a town called Chernomorskoe, which is in Crimea. I kept this Journal, sometimes more regularly than others, to help let family and friends back home know what I was up to.

I’m back in the U.S., but the Journal remains. (Though beware of invalid links. Many of the articles I originally linked to are no longer available.)