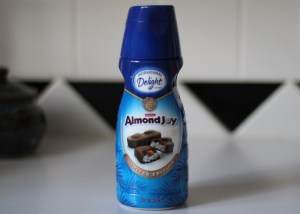 Confession time: I love flavored creamer in my coffee. You know, that sickly sweet stuff that is completely and utterly bad for you? I am pretty sure it is a black hole of nutritional value, not only adding saturated fat and sugar to your diet, but also acting as a vehicle for increased caffeine consumption. (Although recent news does suggest that all that caffeine may not be entirely bad….)

As for flavors, I primarily go for the nutty varieties (hazelnut is the most common offering), but every once in a while I’ll venture out to try something different. Coconut. White chocolate peppermint mocha. Dulce de leche. All fine, but not satisfying in the same ways.

Now, imagine my excitement a few weeks ago when I found this offering in King Soopers, a store I generally avoid as much as possible: 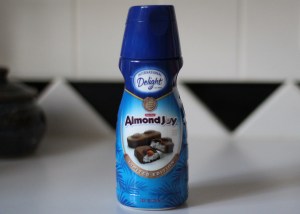 Almond! Coconut! The perfect marriage! I bought a bottle and that week drank far more coffee than is my norm. (Hey, at least I was being proactive in the fight against depression.)

When I ran out, I went back to get more. There were just two bottles left. I figured, this must be a special edition creamer. They won’t make it for long; this is probably the last time I see it. So I bought both bottles.

Yesterday I went back. Again. I thought, I’ll just check and see…. And there it was. Restocked.

I’m enjoying my morning coffee, which tastes of almond and coconut. Mmm.

(This is a dangerous addiction.)