We went to the Choijin Lama Temple museum because we had seen it from our dinner the night before and were curious. I’d read about the temple when researching Ulaanbaatar, but it hadn’t made my list of sights to see.

That was a mistake of impressive porportions. This place is amazing. I think it should be at the top of every tourist list.

Of course, probably I shouldn’t talk it up so much. How could it live up to expectations?

I’ll stick with pictures for this one.

This is the view of the Choijin temple from the Silk Road restaurant. It is so striking against the cityscape, we immediately wondered what it was like inside. 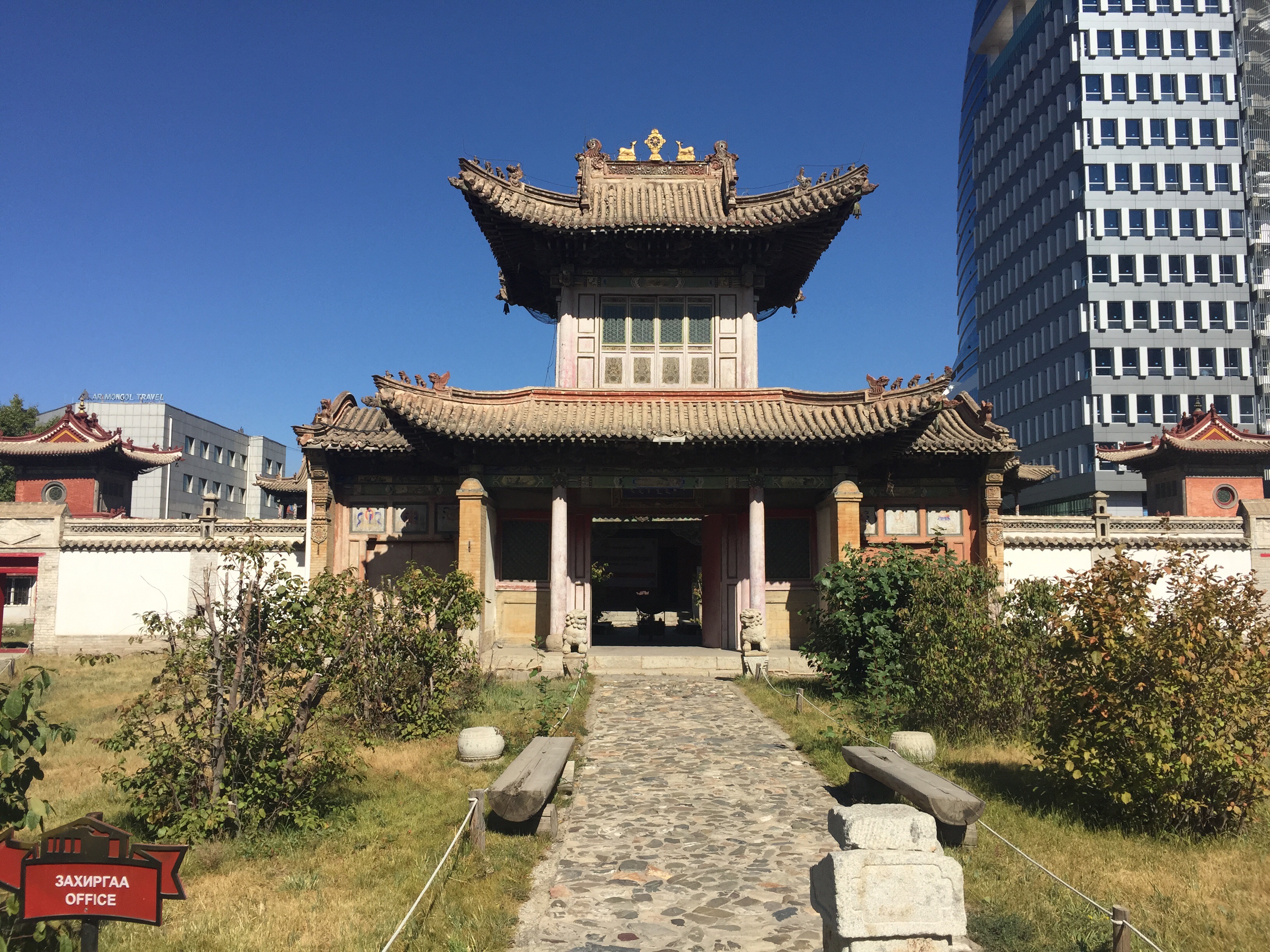 Entry to the museum/temple was about $4. The fee to take photos was $25. Thinking the latter price was highway robbery (and having no clue what we were about to encounter), we declined to pay the latter fee. Then we took photos anyway. I feel a little guilty about that, but sriously. That price is incredibly high. 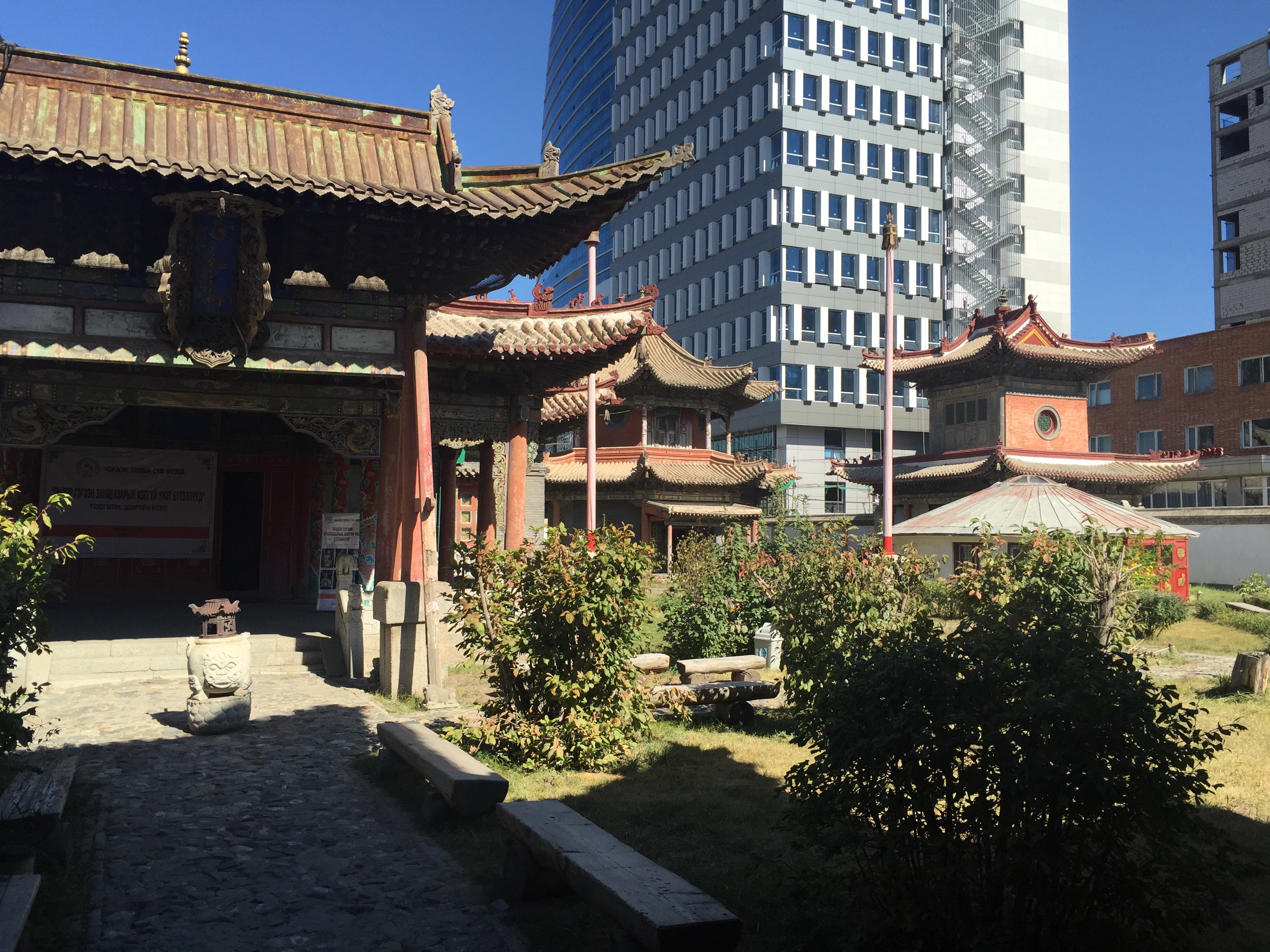 Another view going in. 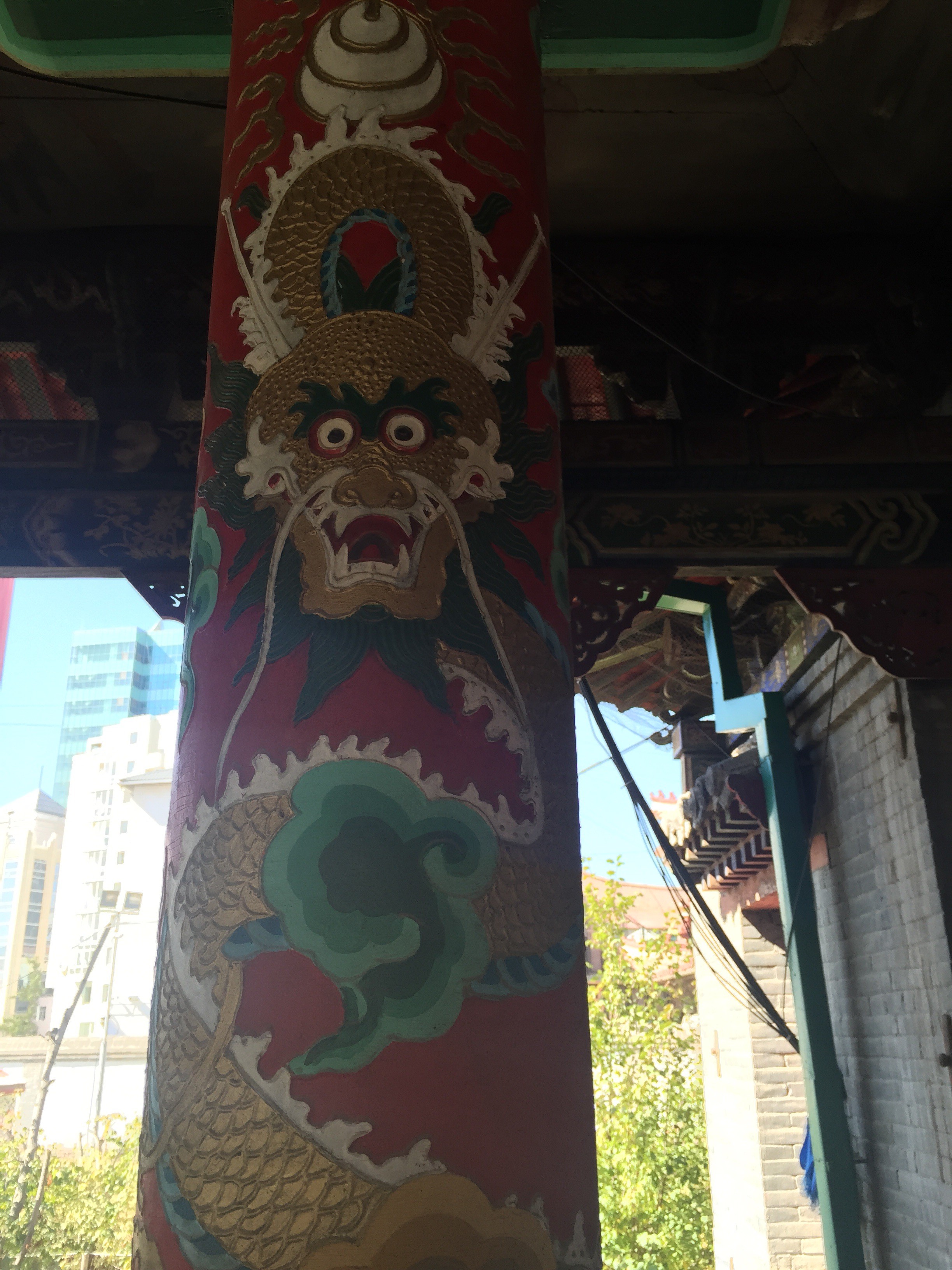 From our first step inside the complex the artwork was amazing. The paint on these columns was just the beginning. 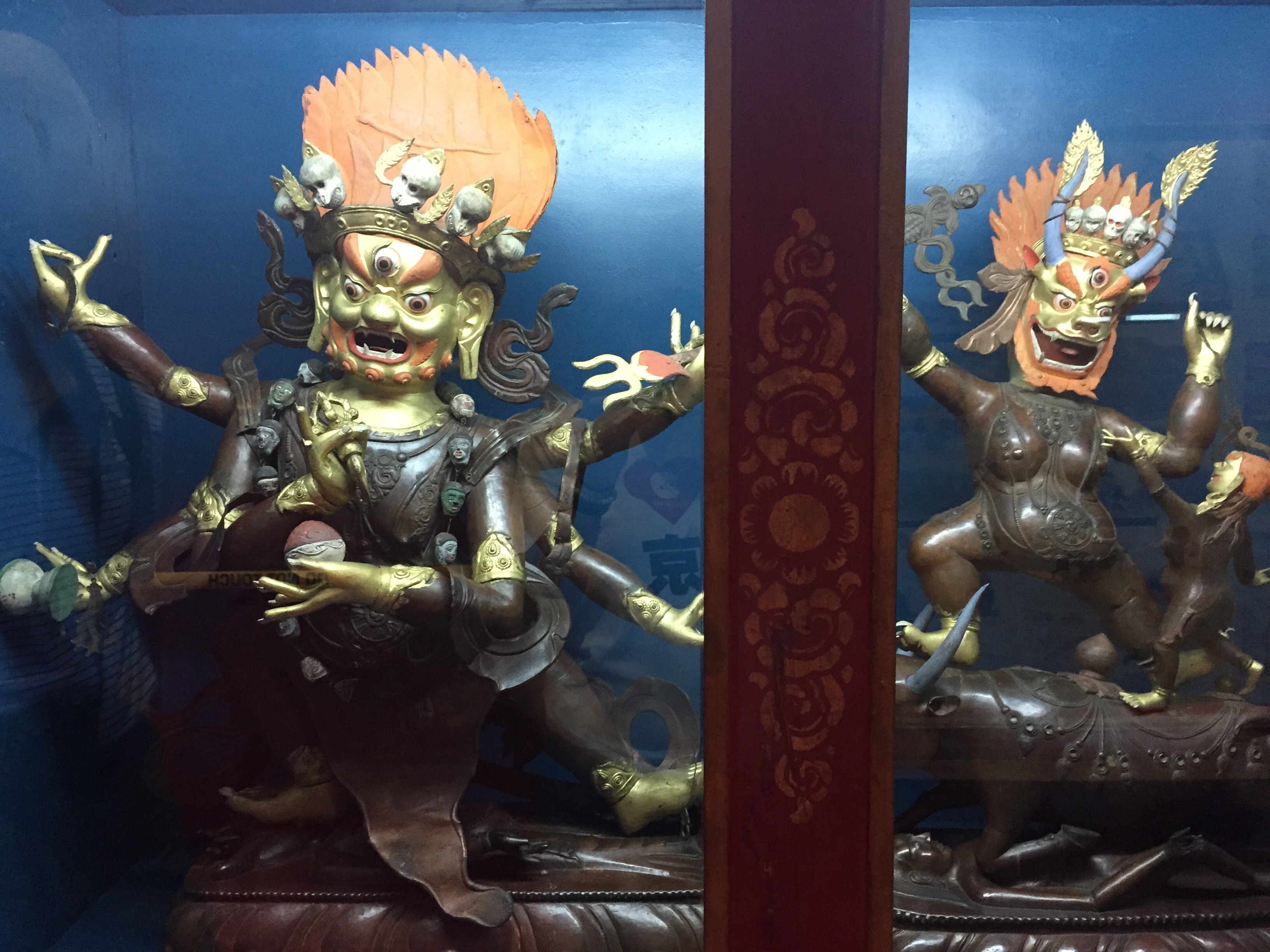 I don’t have any pictures of the main room, where the most impressive art (and most valuable) was kept. Here’s a sample from a side hall. 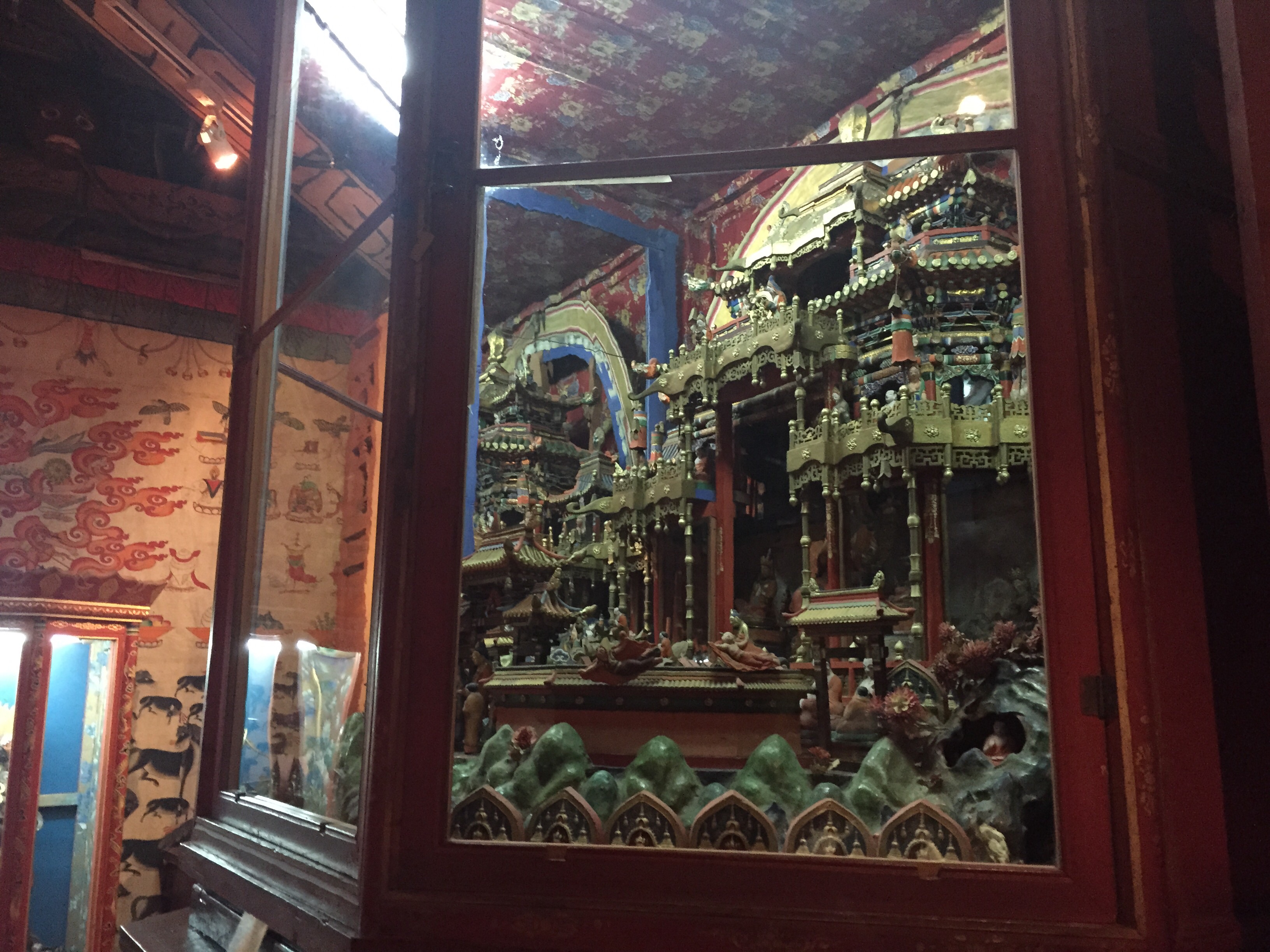 There were also two model temples that were elaborate and beautiful. Even the walls were painted. 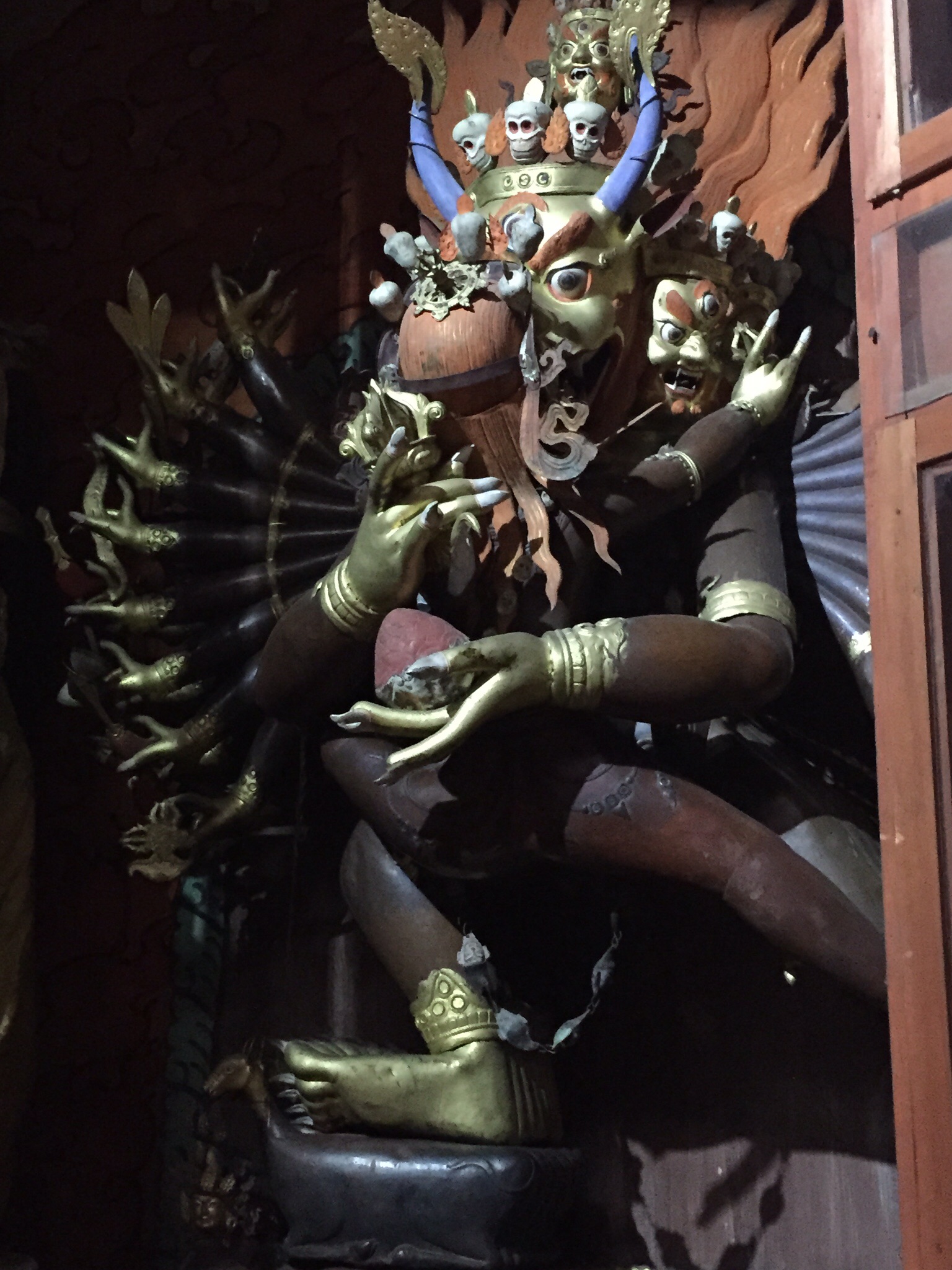 Here’s one of my favorites. It’s called “Slayer of Death”. 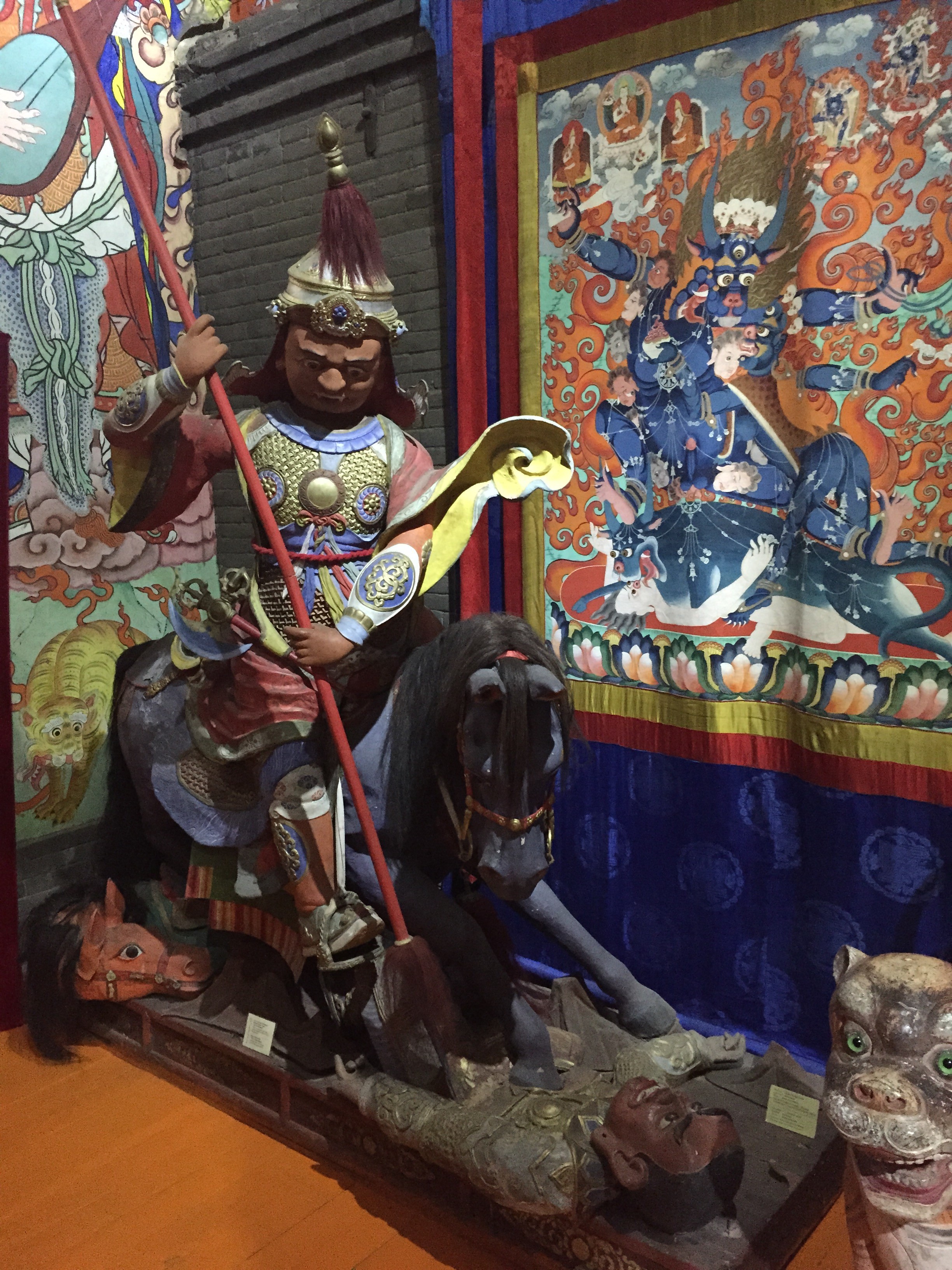 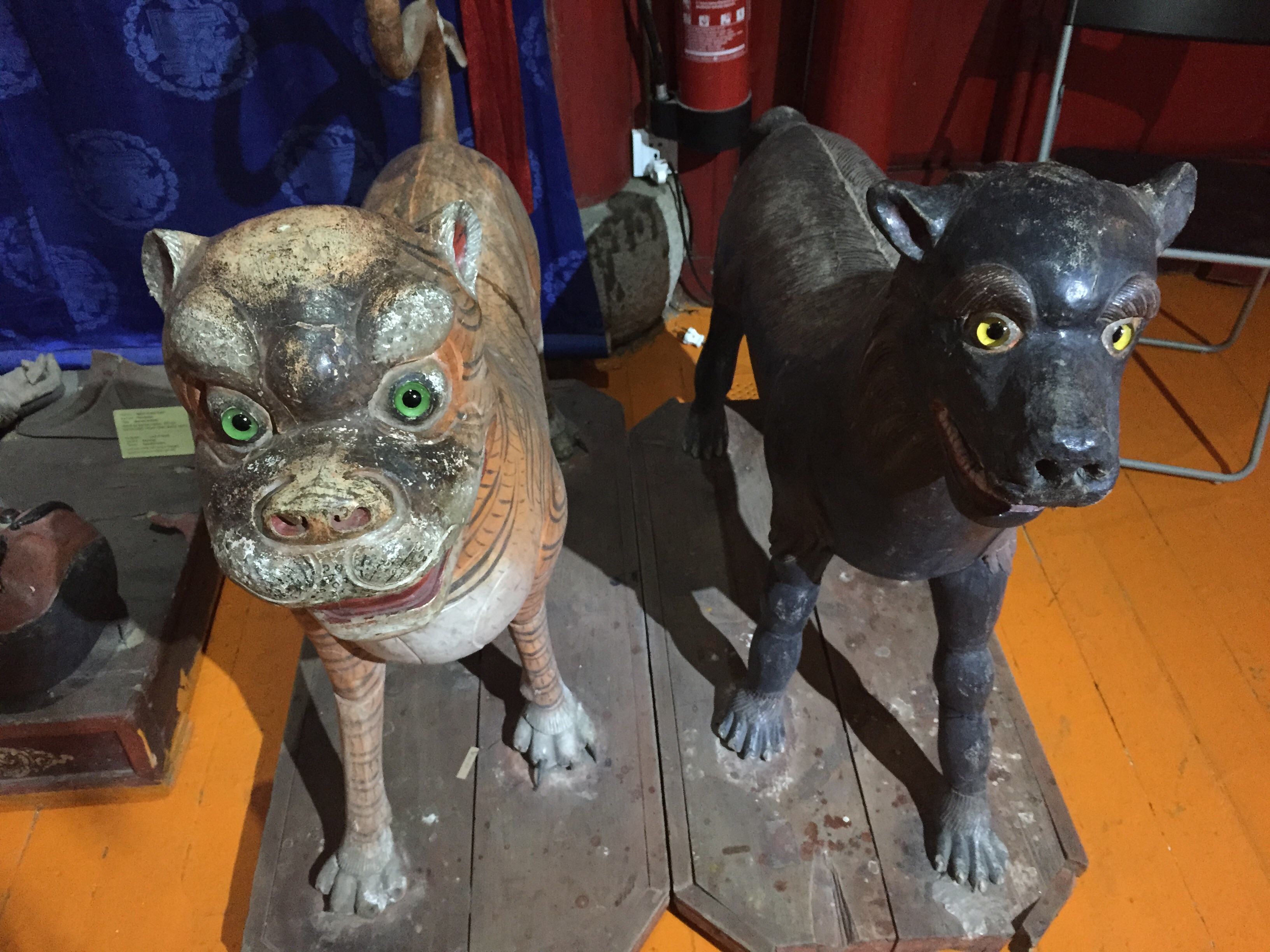 These guard animals where on either side of a door, with no sign. They seemed a bit haphazardly placed to me. I’m not sure what they were originally for. 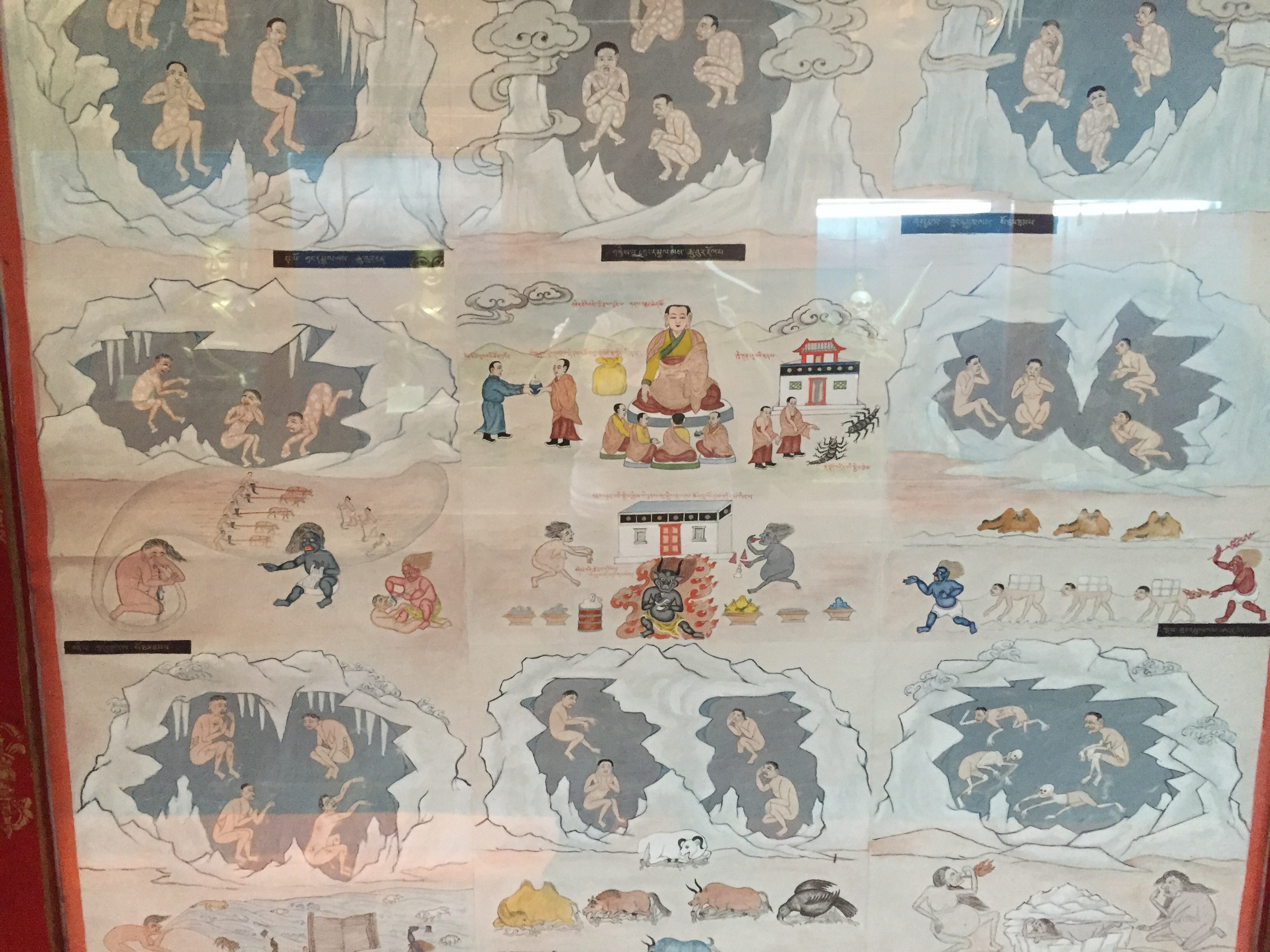 This painting was entitled “The Cold Hell”. 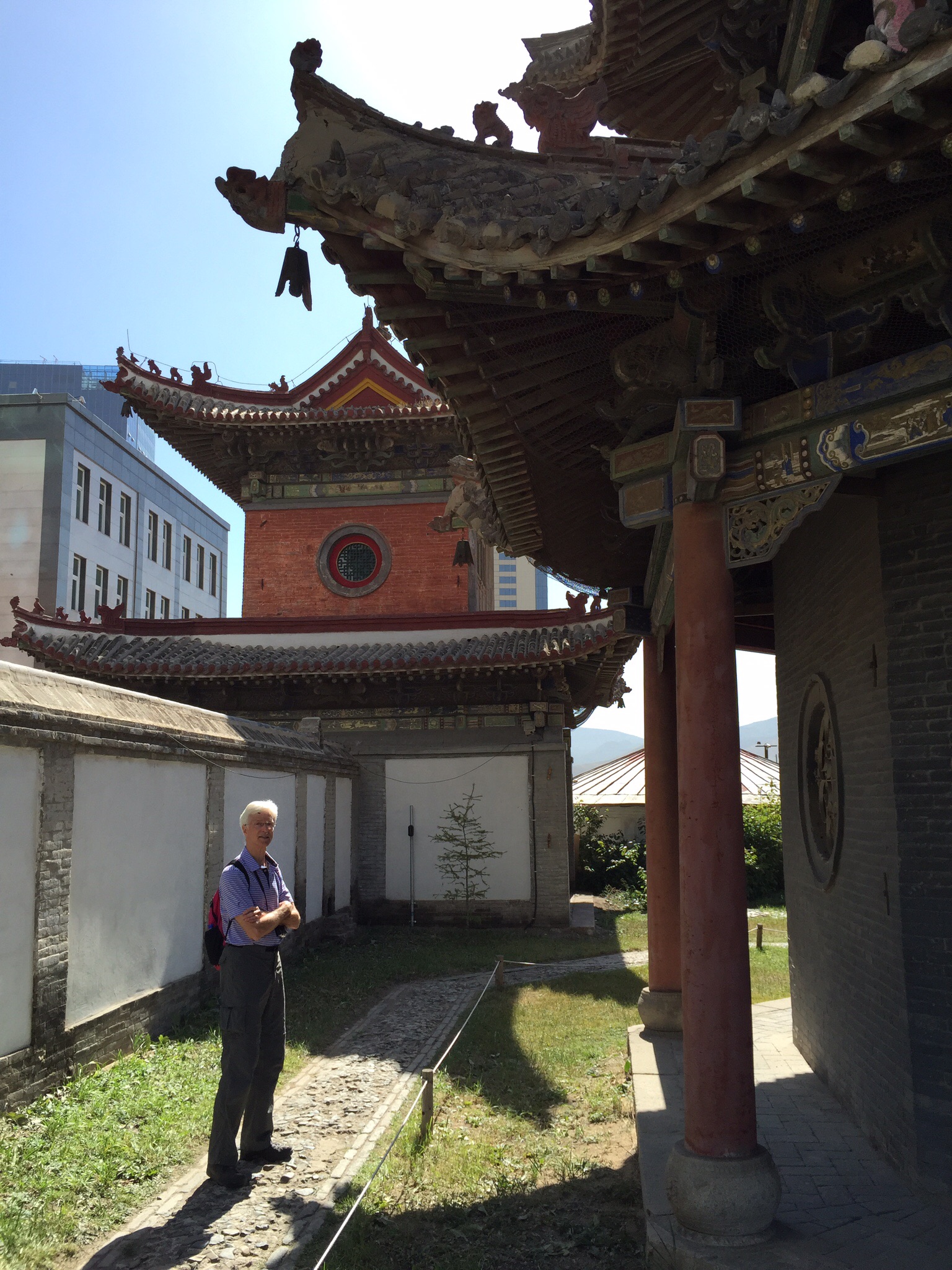 Not all of the displays were in the main temple. There were several smaller temples that housed additional displays. Here Steve stands outside one of those buildings. It was not open before we arrived; one of the women managing the displays rushed to open it for us. A pathway between buildings. 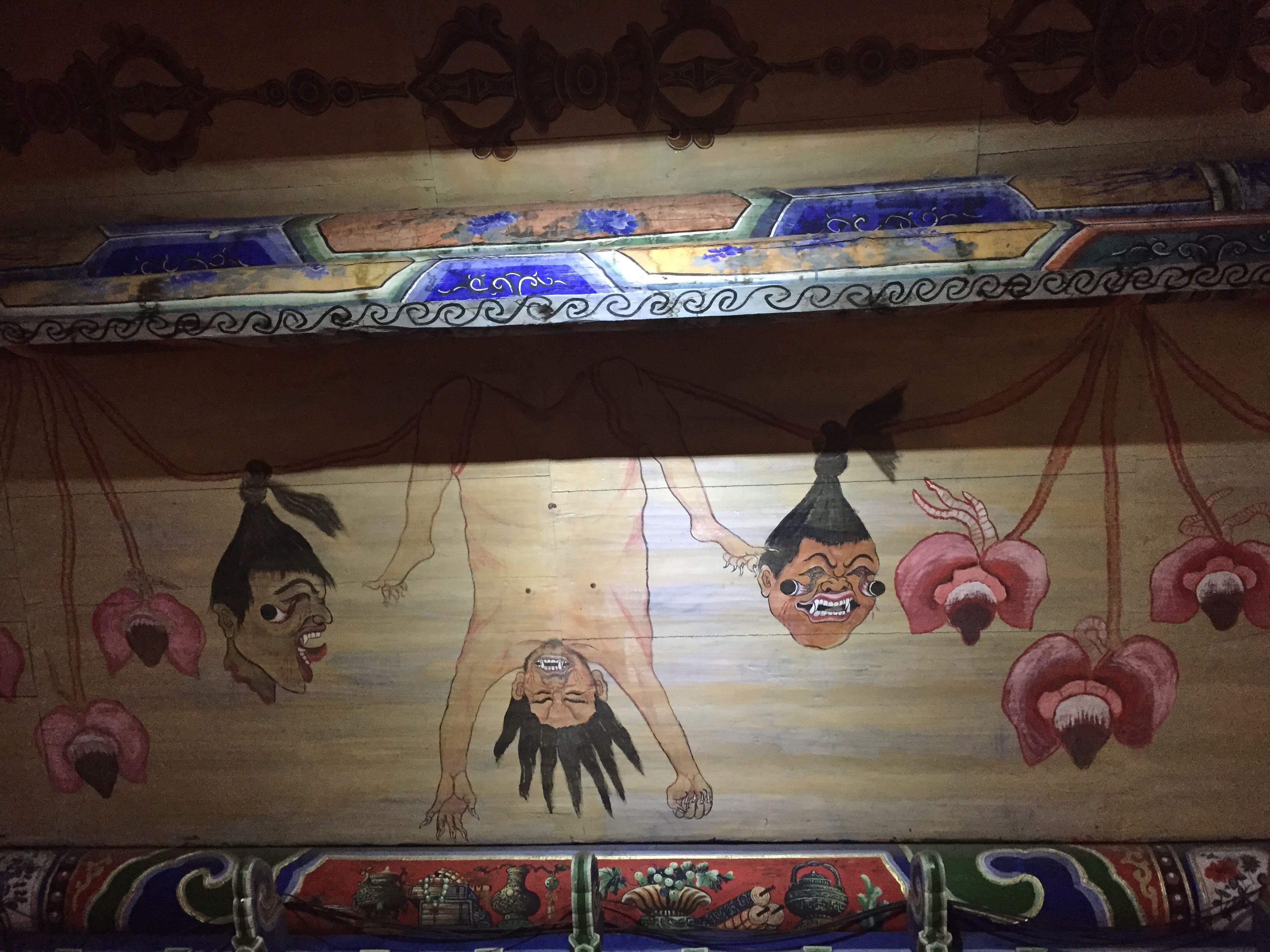 Much of the art was rather violent. I understand this is a characteristic of Tibetan Buddhism. This was painted on the ceiling, over the entrance. 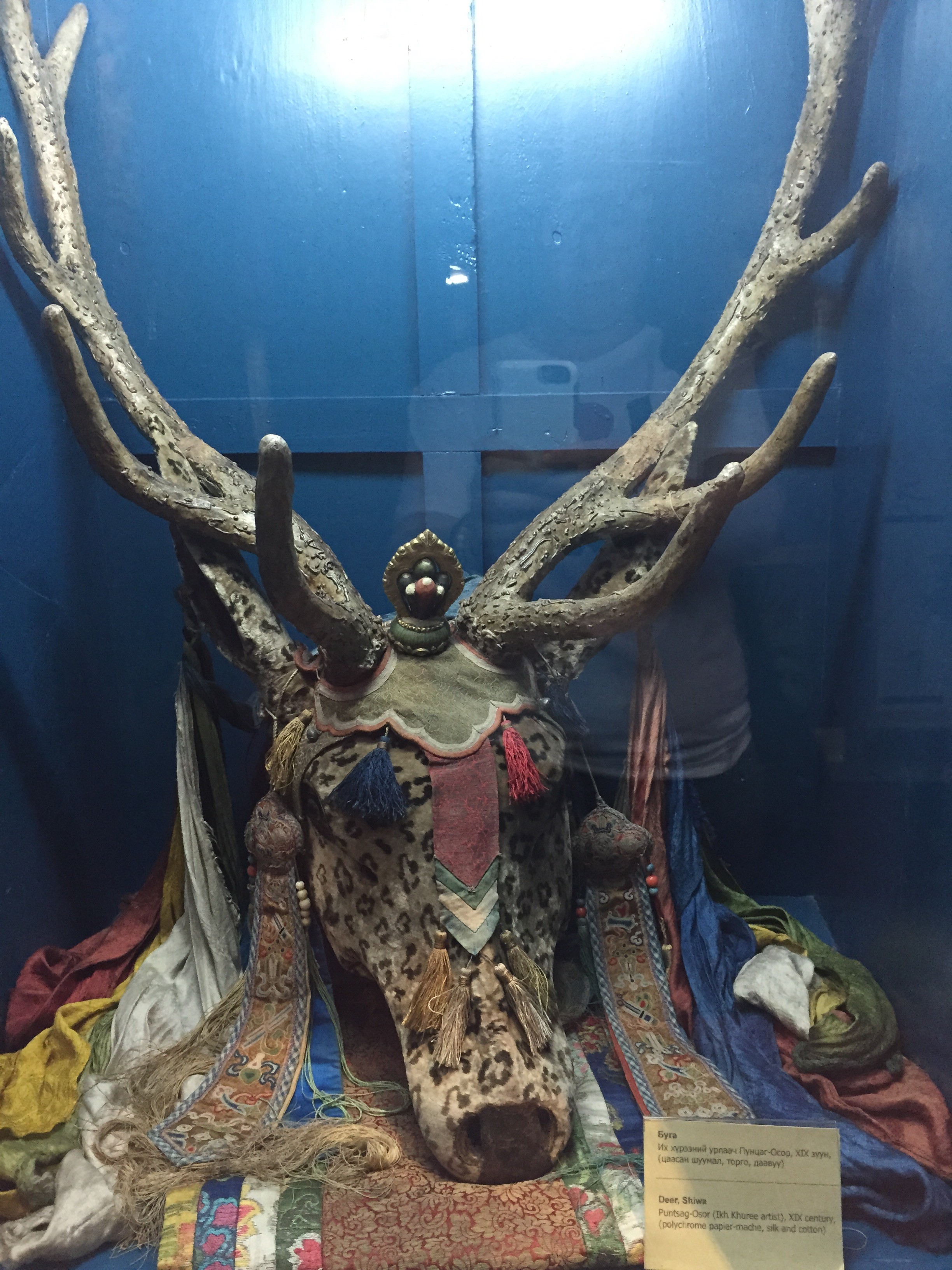 A mask…the only one I noticed on display with antlers. Beautiful and intimidating.

(My suggestion to the museum: Raise your base entry fee for non-locals. Allow casual photos. Charge professional photographers.)