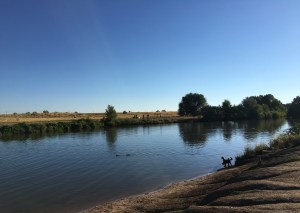 Ah, Beatrice. Beatrice is the older of my two dogs, and my favorite. (Probably I should not admit to favorites, but yeah. I’ve got one, and Bea’s it.) Bea is a dog with outsized personality but little backbone, and Bea’s general timidity is why we haven’t taken much advantage of the fabulous off-leash area t Chatfield State Park.

I took Beatrice there a couple of times when she was young, and it didn’t go well. I think it’s because Bea looks a little like a sheep. A black sheep, which possibly exacerbates things. The herding dogs would take one look at her and think she was a beast in need of  direction, then do their best to provide it. They would run up to her and nip at her shoulders and in general hover over her while she cowered, tail between her legs. When we tried to move, they’d follow, nipping and slobbering all the way.

At a dog park, it’s as much about the other owners as it is about the dogs. And my experience with the owners the first couple of times I took Beatrice to Chatfield was not good. As my dog was cowering in fear, they generally laughed and ignored the situation, rather than calling their dogs away. So we didn’t go back. I wrote Chatfield off as a park with bad owners, and found other parks.

Which is a shame, because Chatfield is amazing. The dog park area has been around since 1983. It comprises nearly 70 fenced acres, several miles of trails, and two large ponds to delight water dogs everywhere and give you every opportunity to bring home as much wet dog smell as you like. To top it off, there are bathrooms for the humans, bag dispensers along the trails to help you out if you’ve forgotten your own, and trash cans scattered throughout as well. AND drinking fountains for your dogs. It’s great, really. All for the cost of entry to the park plus $2. 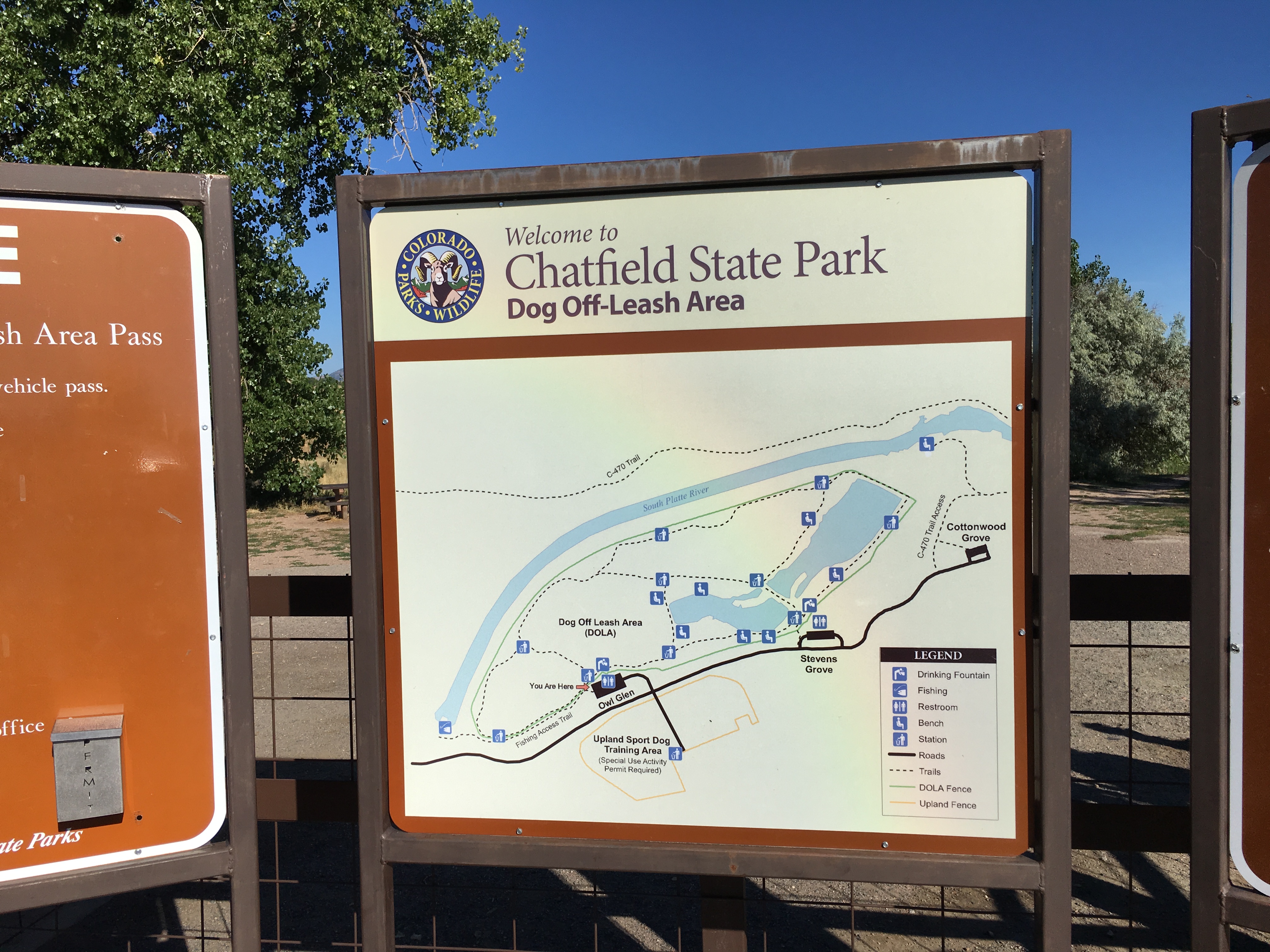 Map of the Off Leash Area at Chatfield State Park.

I gave the park a second chance a few weeks ago when I met some friends who were staying in the campground. I thought it would be nice to give the dogs a chance to run around (and tire themselves out) before introducing them to strangers, so we stopped at the dog park before heading to the campground. 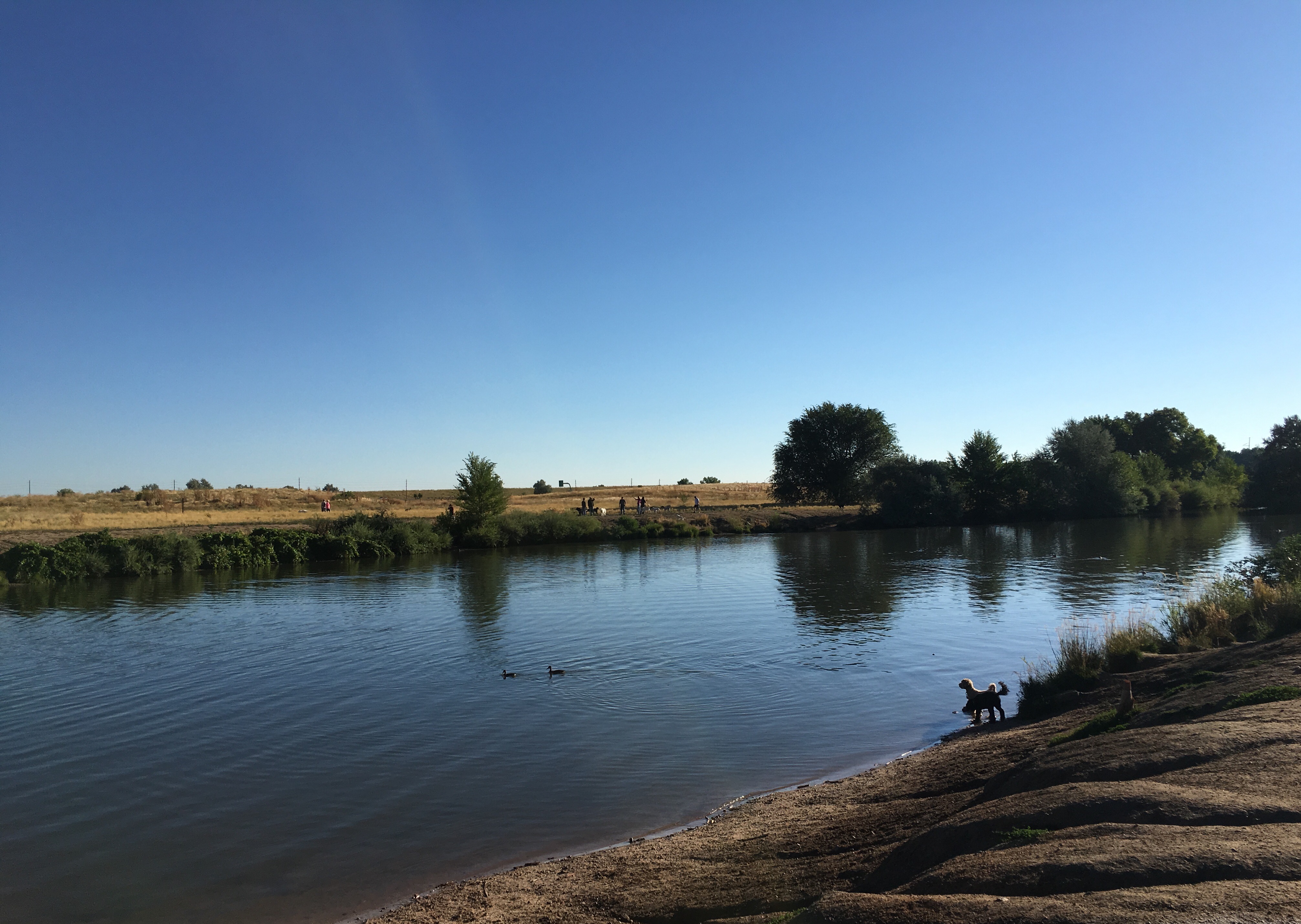 Even the ducks are not exciting enough to entice Beatrice or Milo into the water….

What a different experience! Both dogs had a great time. (Milo, who prefers to get his feet wet and stop there, misjudged the depth of the pond at one bank and fell all the way in. I was pleased to see that he managed to figure out the whole swimming thing and that I didn’t need to wade in after him.) We walked around the fence line a couple of times, totaling about 4 miles, until Beatrice was so tired she dropped her pace to about one mile an hour. 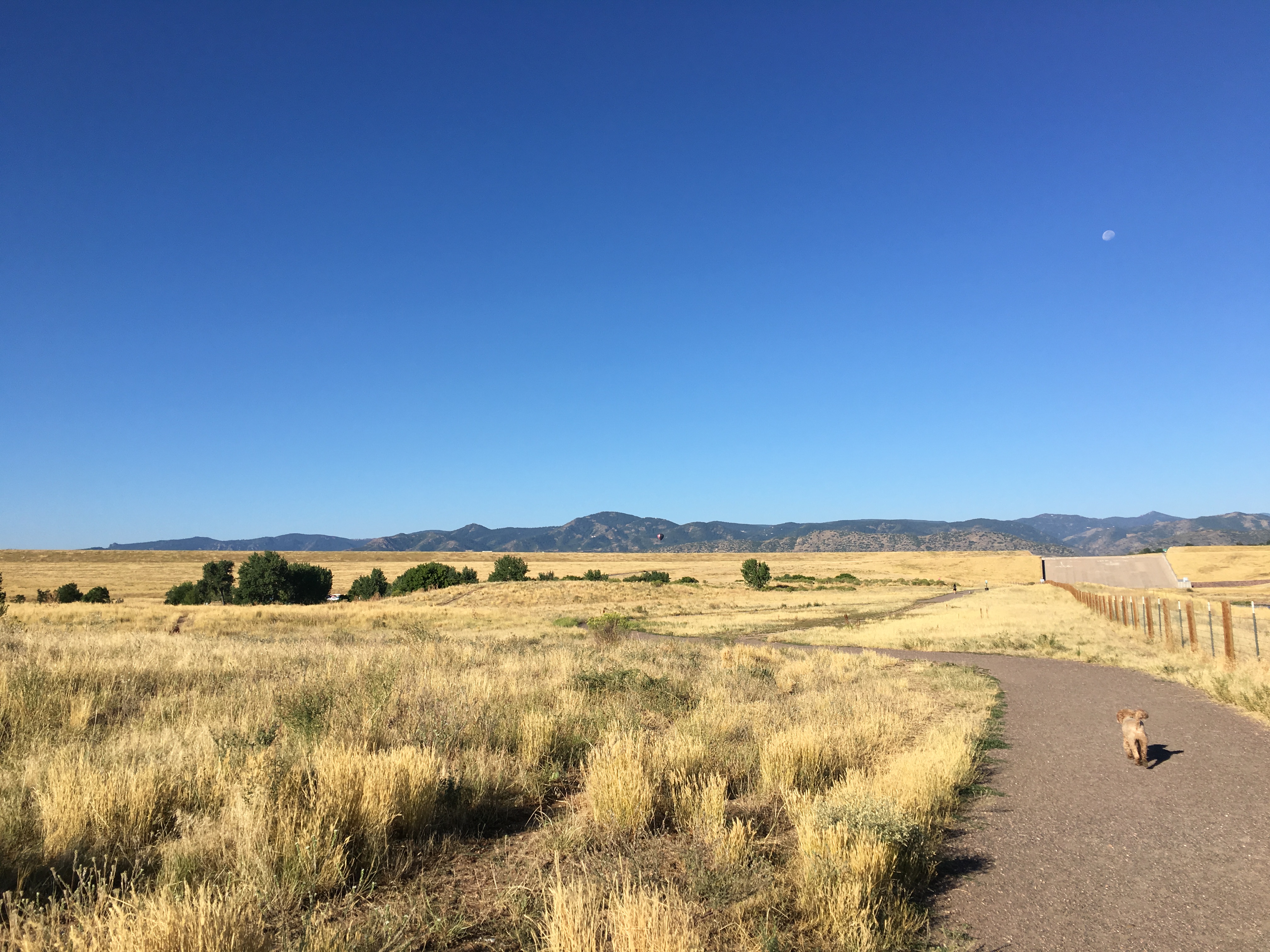 Little brown dog running through an August brown landscape. See the moon still in the sky?

Since then, we’ve gone back a couple of time, each time enjoying the park and the other dogs, and not having any problems with the other dogs or their owners.

Last weekend, to celebrate our reacquaintance with the park, I stopped at Starbucks and got the pups their first ever puppaccinos: whipped cream in a little cup. Delight ensued. 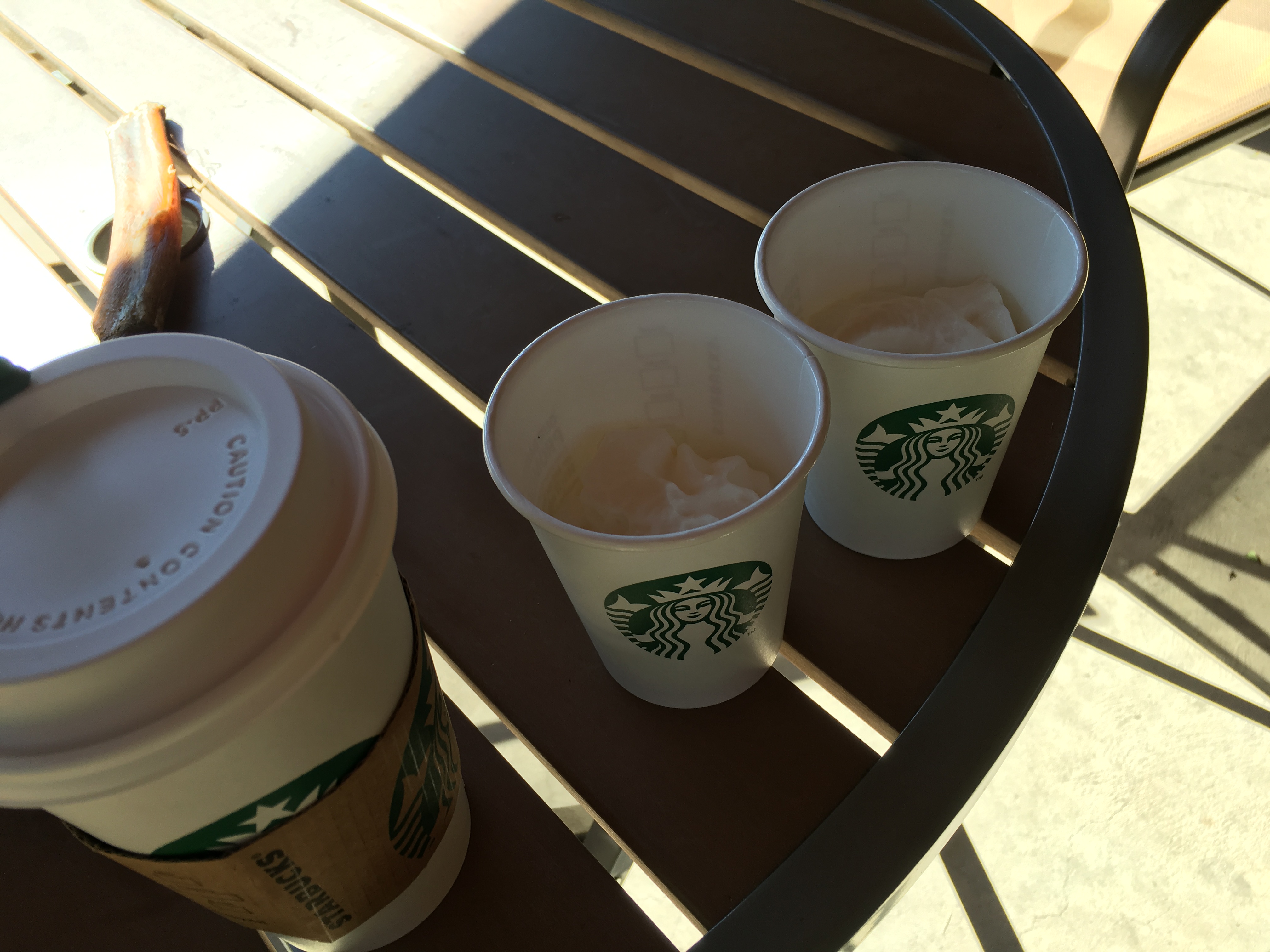 The puppaccino: a small cup of whipped cream for your pooch, courtesy of Starbucks. 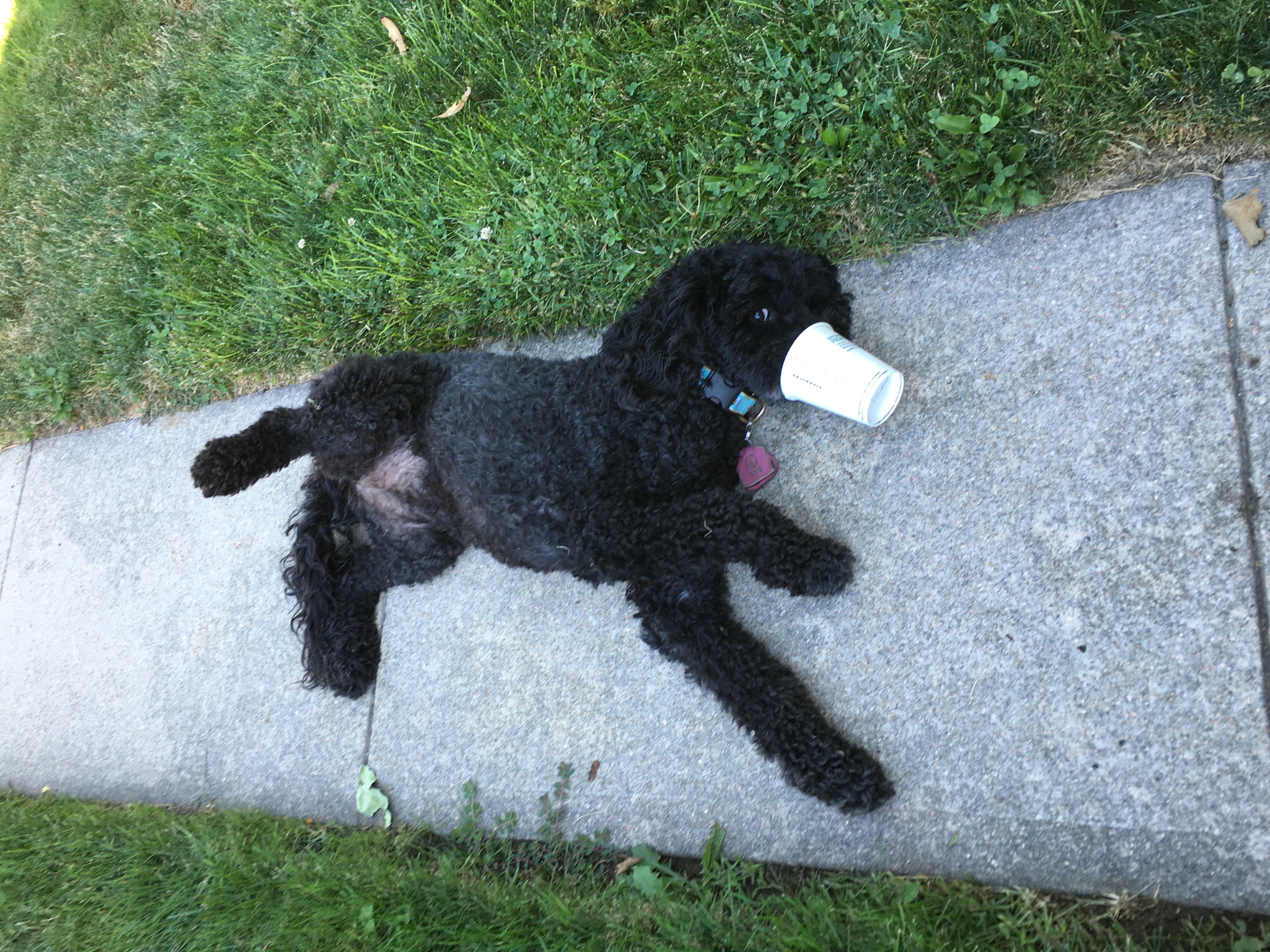 I left Bea with a partially consumed puppaccino while I went in for some Breakfast. When I came outside again, Bea was lounging contentedly with the empty cup on her nose. When she saw me, she requested a belly rub.