Camels, Erdene Zuu, randy monks, and a second night in a ger 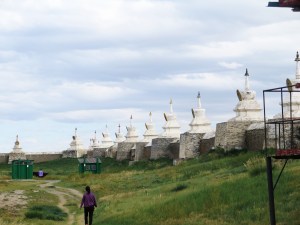 After leaving Altaa’s, we drove for an hour or so to Harhorin (or possibly spelled Kharkhorin). On the way we stopped at a roadside camel attraction. That sounds weird, but I am not sure quite how else to put it. There were camels, there were camel minders, and for a small fee we got to ride on the camels. 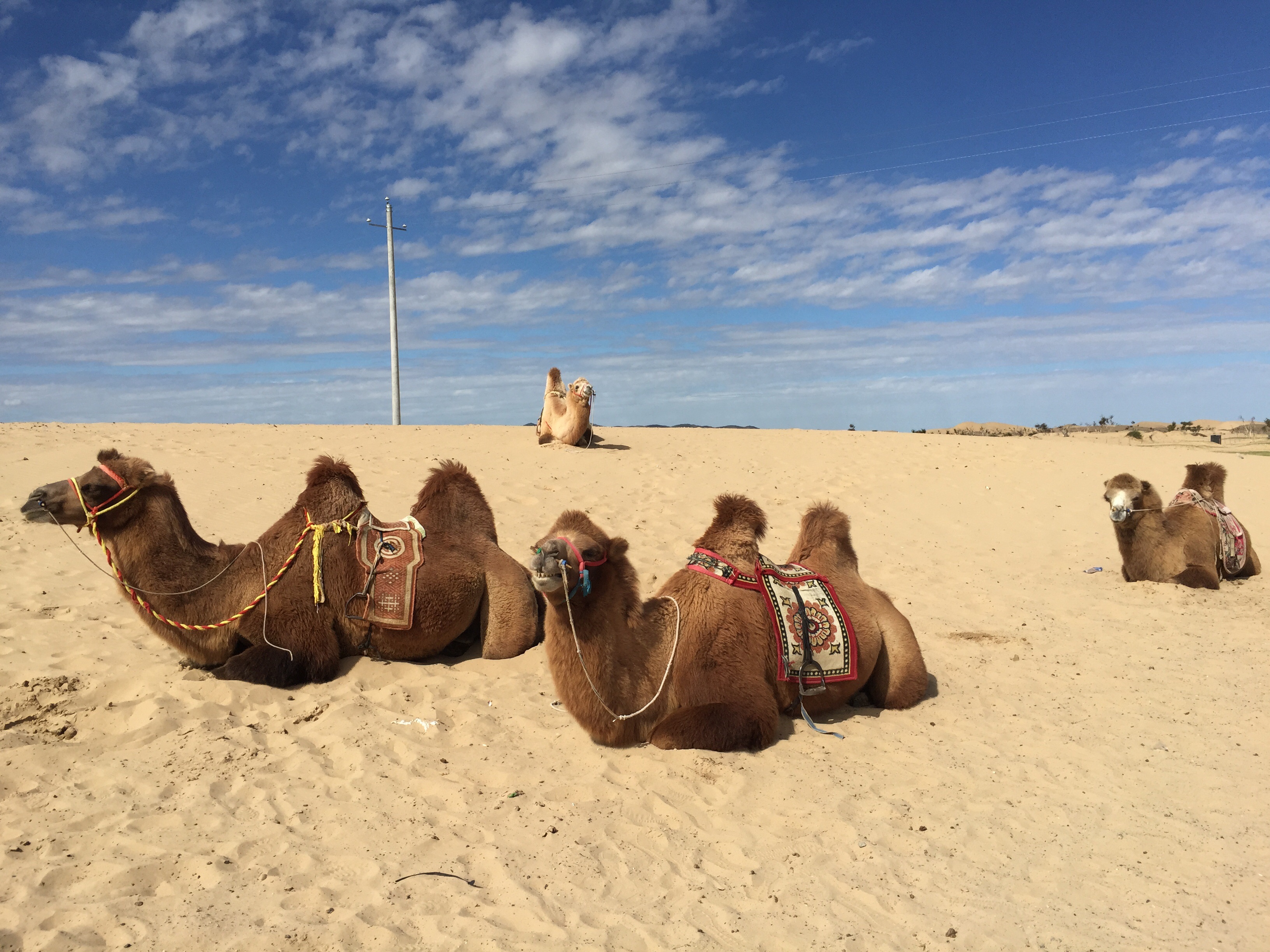 Here are the camels in their resting position. (I’m just assuming they’re resting, really.) This is what they were doing when we climbed on.

(Actually, I’m not sure how small the fee, as Meg paid it. But I’m assuming it was small.)

We hopped out of the truck and within 30 seconds I’m being directed to hop right on a resting camel. I was thinking, that hump is high. How am I supposed to get my leg over it?

But I managed it with a stretch.

Then the minder put my feet in the stirrups (one was higher than the other) and directed the camel to stand.

Oh my god, I’m so fat! The poor camel! Will I break him?
Whoop, back end up first, I’m gonna tip over his head!
Nope, we’re all good!
Wow, this camel is really comfortable!
Soft fur….I wonder if he likes being pet…..
Seriously, camels are way more comfortable than horses. 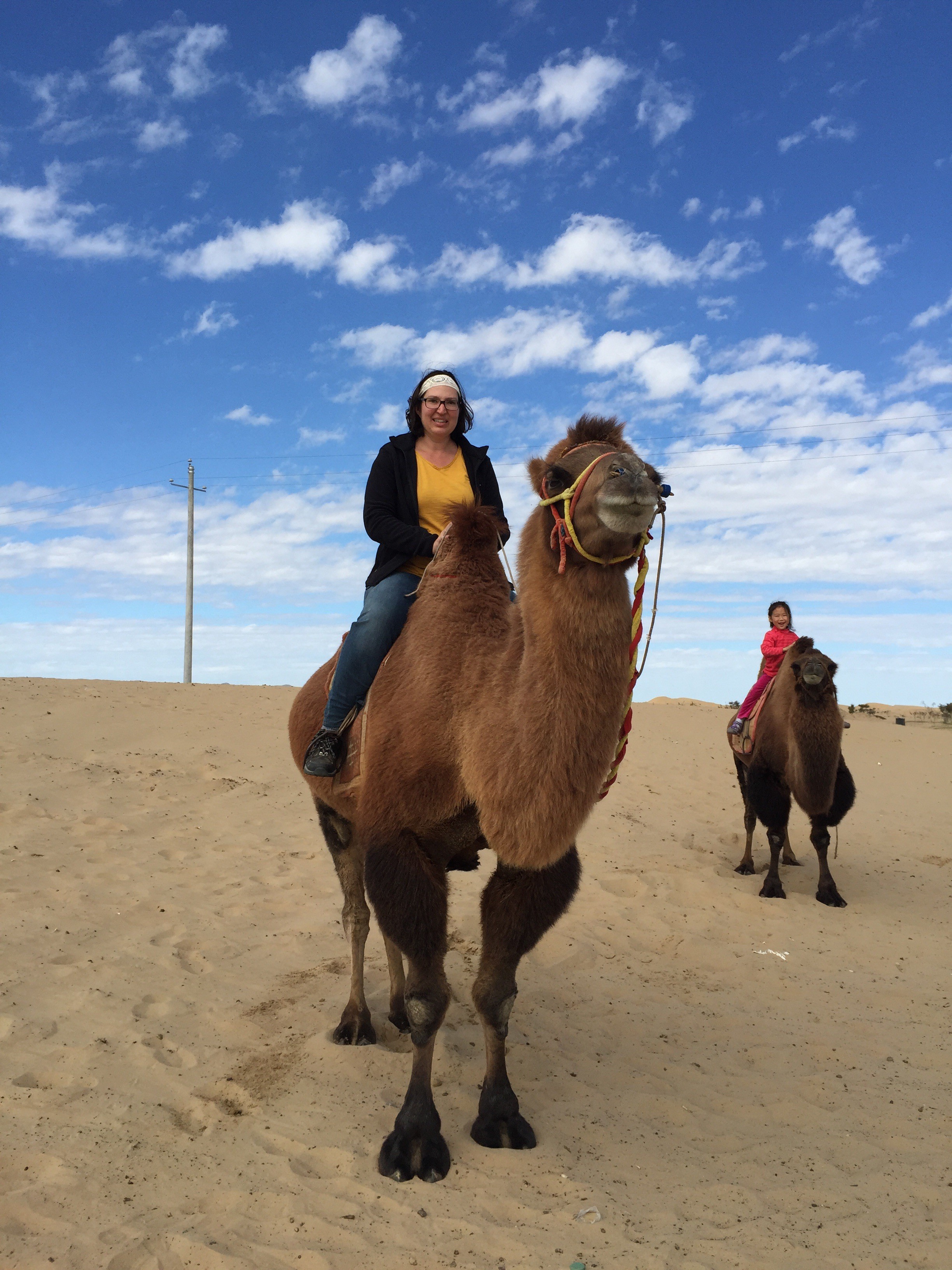 Seriously, I’m on a camel!!

We’d only asked for five minutes on the camels, which was sufficient and highly entertaining. The minder lead us around for a bit and posed us for pretty pictures. Then the camels were back in their resting positions, legs thrown back over the humps (stretch), and we were back in the car and on our way to Erdene Zuu. 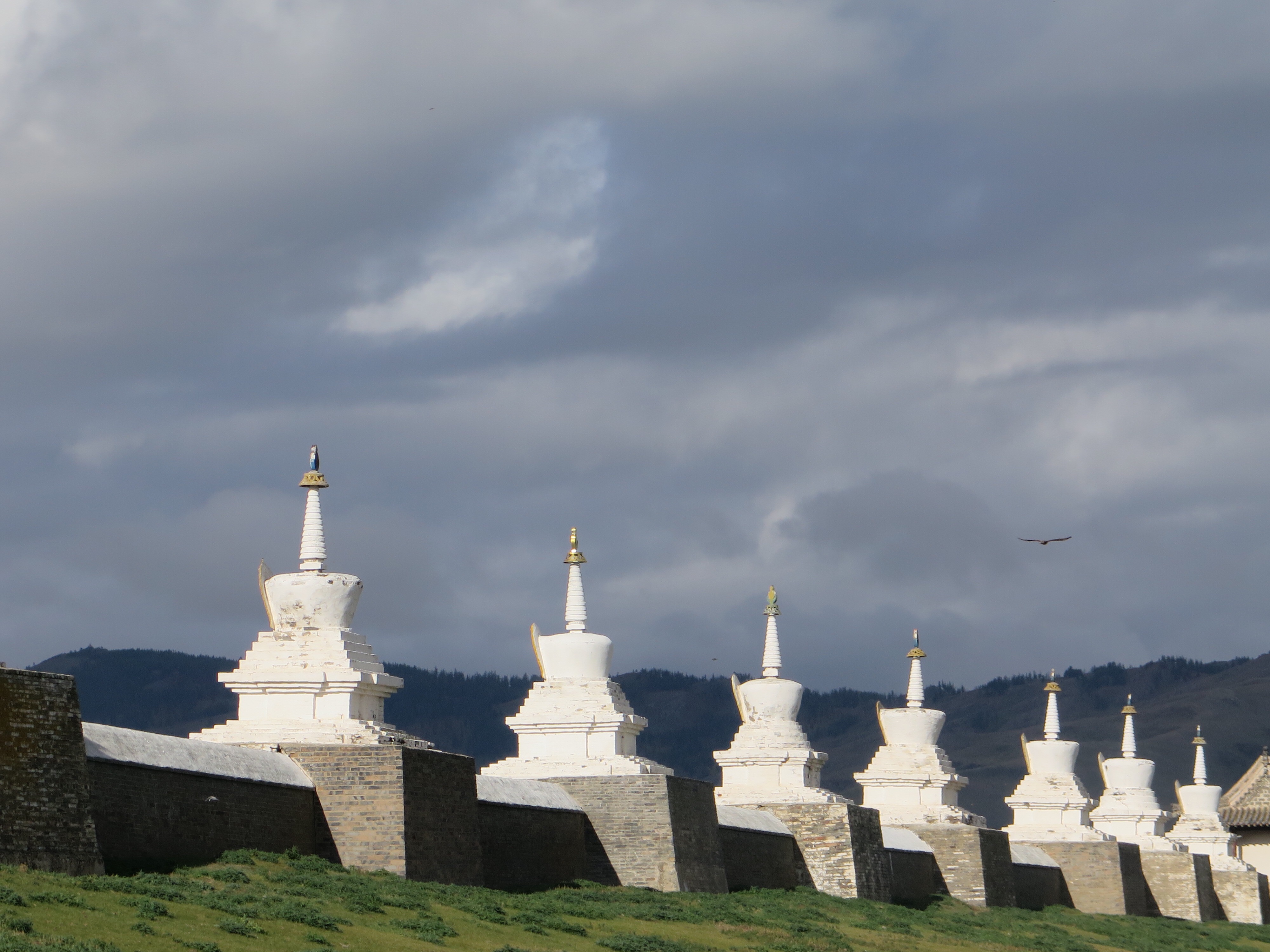 See that bird in the picture? I’m pretty sure that was an eagle.

Erdene Zuu was one of the places that I was most excited to visit. (Do a quick image search and you’ll see why.) It’s one of the earliest surviving Buddhist monasteries in Mongolia (built around the late 1500s), and is still active. Erdene Zuu is also built literally on top of the ancient city of Karakorum, once the capital of the Mongol Empire. In the museum we visited after the monastery, they said it is believed that the monastery is directly above the ruins of the palace. That gave me a real sense of the age and history of the place. 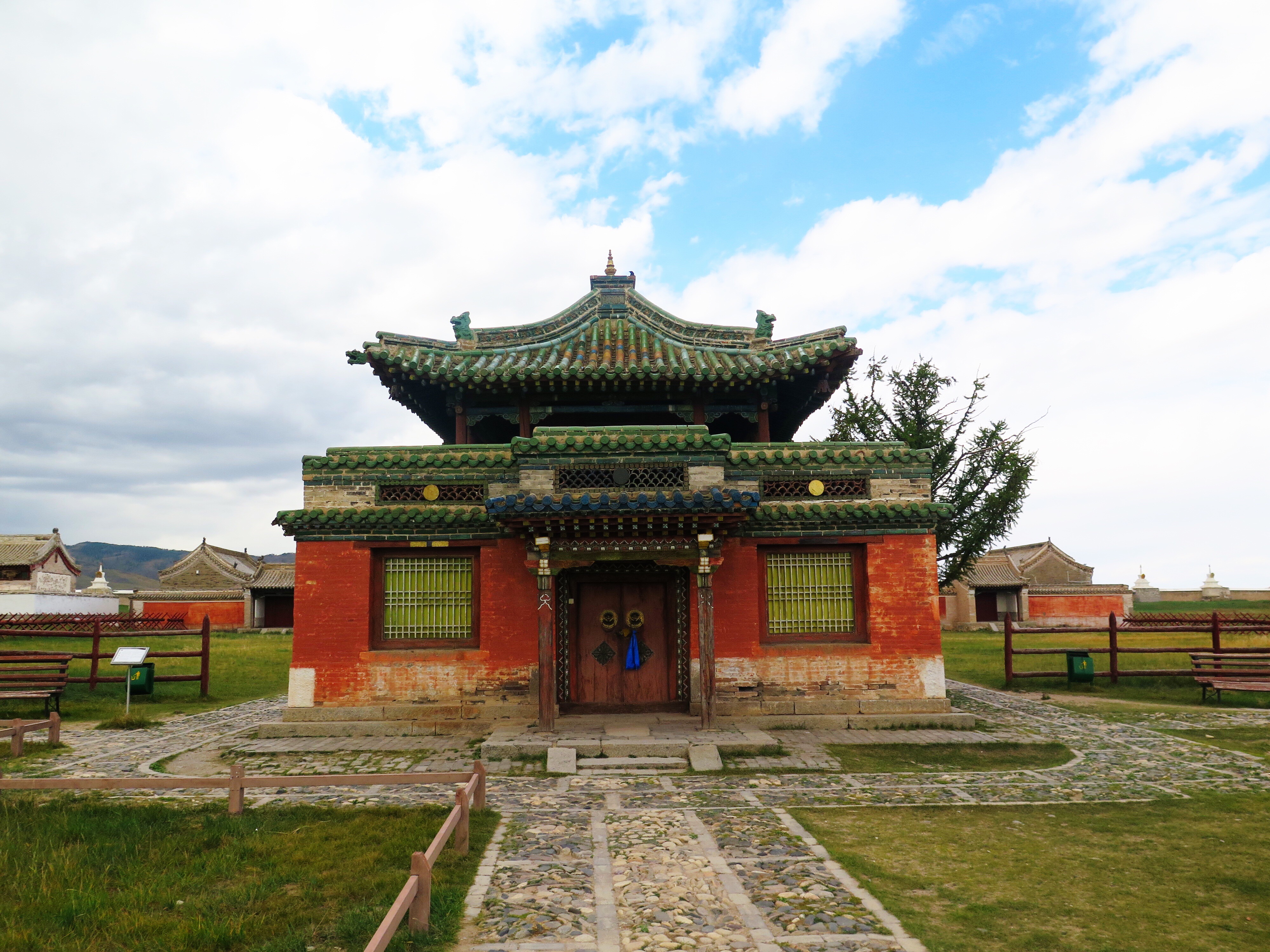 Erdene Zuu, inside the complex. 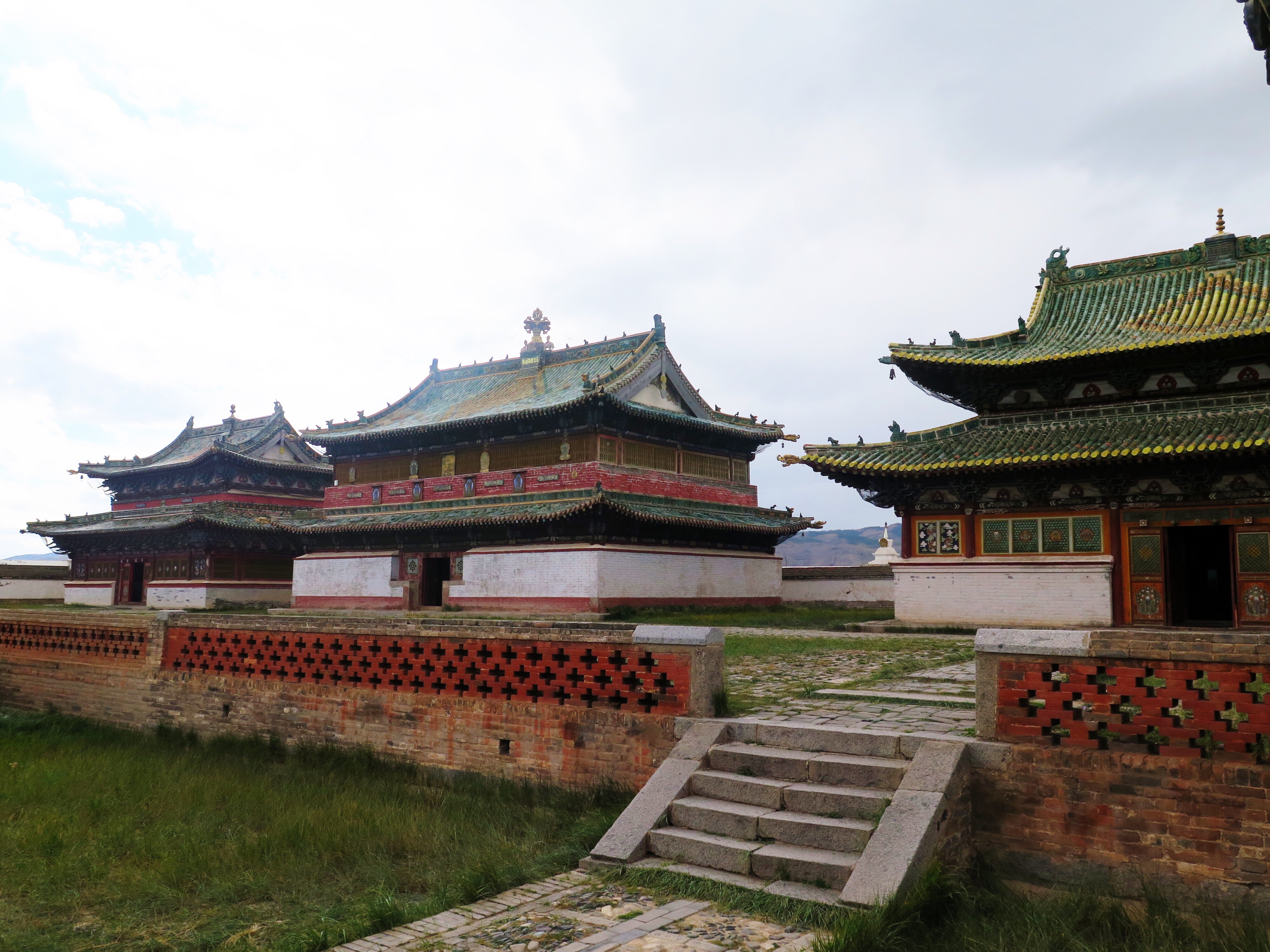 These are the three main temples, which we toured.

The complex of Erdene Zuu itself is quite sizable, much of it given to grassy field that once housed buildings and gers for the monks that lived and prayed there. The tour we took only covered a small part of the complex: its main three temples and two smaller side buildings that now house beautiful works of (Buddhist) art. 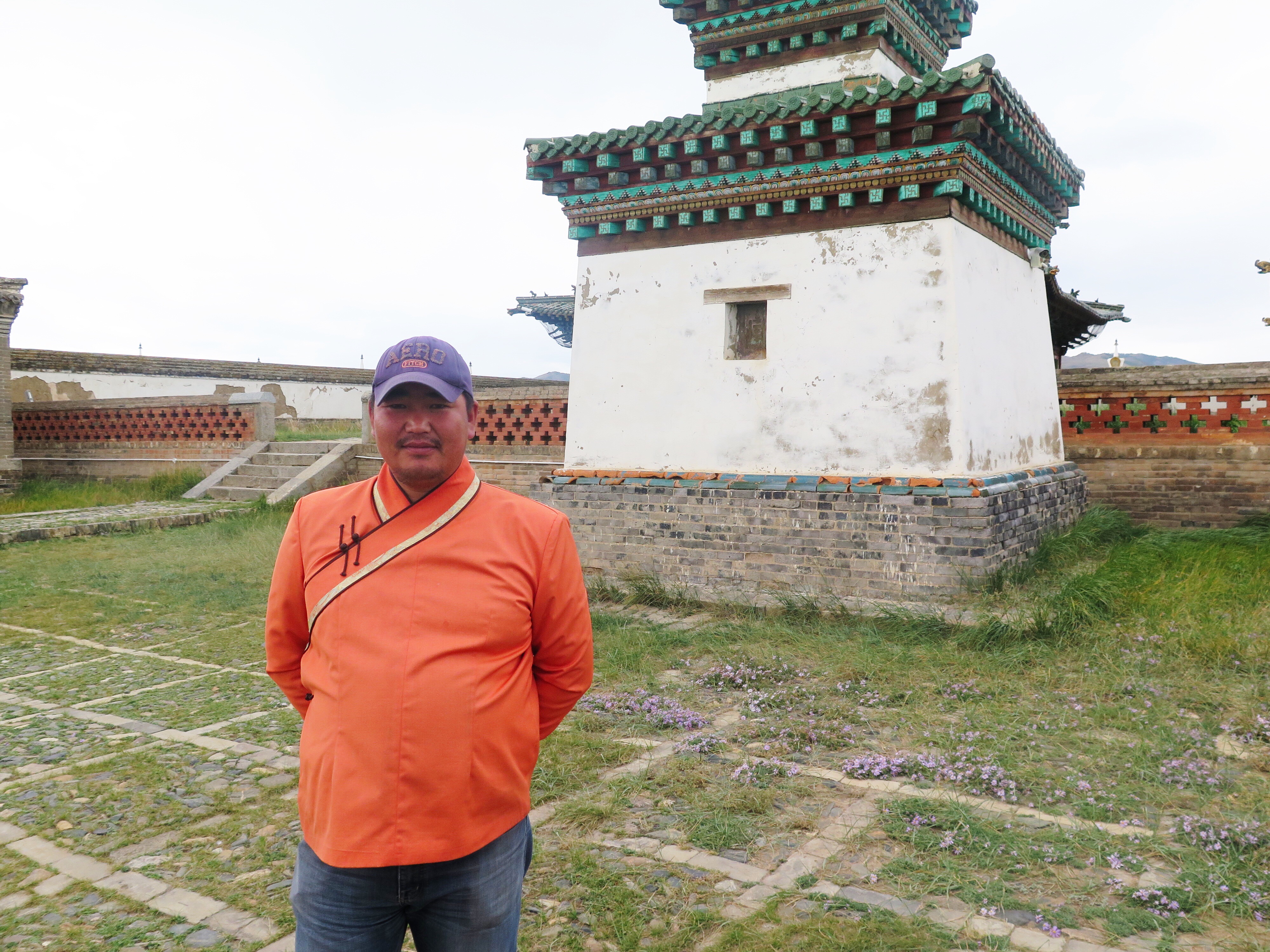 Our tour guide. He was great. I hope he doesn’t mind having his picture on this internet. I asked if it would be OK to take it, but not whether I could post.

One thing about this tour: the guide was wonderful. (I should have asked his name.) He had not only the knowledge of the place, but clearly a good feeling and believe in Buddhism, and was able to answer questions I’d had from our visit to the amazing Choijin Lama Temple in Ulaanbaatar: what’s with all the violence?

Again, I’m neither a Buddhist nor a scholar of (Tibetan or any other) Buddhism, but my new understanding is that these warrior gods are protectors of the people who are fighting sin and defeating evil. I had wondered before what the skulls on the heads of one of the gods in particular represented the five sins of Buddhism:

The guide also pointed out that this particular goddess had a baby in her mouth (I wish I could remember her name–I’ll add it here if I have a chance to look it up in the near future). I thought that was rather horrifying, but the guide said it was “beautiful” because it was a sacrificial act. The goddess had married the devil in order to defeat him, and after his death had given birth to twins. One child was good, the other evil. So the goddess killed the evil twin in order to protect the world.

[Edited to add: The goddess is called Palden Lhamo, and according to this site she’s more Tibetan than Mongolian. But our guide stressed her importance to Mongolian Buddhism, and she was certainly all over the artwork we saw in Mongolia.)

We would visit this monastery again in the morning, this time in an active temple where we could hear the monks chanting. This was quite interesting, and not at all what I expected. It was in some ways disorganized, with some monks getting up and moving about as though running errands, others joining in and dropping out of the chant from time to time, and people entering and leaving the temple. Meg told us this temple was also a sort of school, and that the young boys would decide when they were 15 or so if they wanted to graduate to be monks, and perhaps continue their studies outside of Mongolia. Many of the monks there, she said, had studied in India.

Because we can’t take pictures inside the temples, I only have a few shots of the exterior of the buildings of Erdene Zuu. I didn’t take any of the monks. 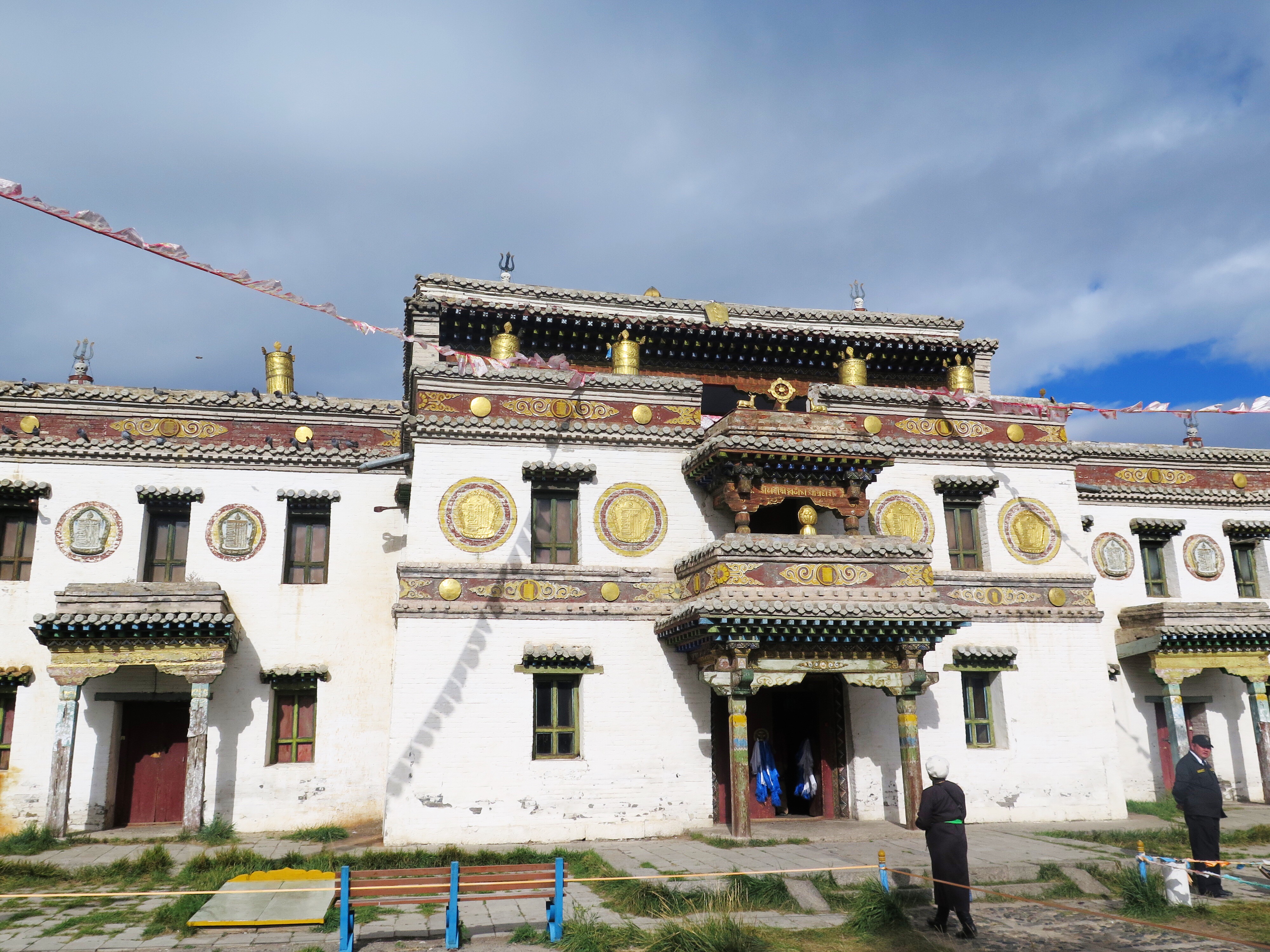 This is where we heard the monks chant.

After Erdene Zuu, a 5-minute drive took us to the turtle and then “the dick” (as Meg put it). The turtle is, well, a turtle. Not so interesting. But the other…I’d read about that and gotten a good giggle.

Here’s how Meg told the story (and apologies to Meg if I mess it up; I’m writing this two days after she told us the story):

A long time ago, the monks of Erdene Zuu were getting a bit crazy. They kept sneaking off the compound and having sex with the women in town. The monks in charge were worried, so they went to an extra-holy man and asked him what they could do to keep their monks in line.

The extra-holy man was like, Sure! You know that mountain near your temple that looks like a big vagina? Well, what you need to do is carve a giant penis from stone and place it on the hill so that it’s pointing towards the mountain-vagina.

The head monks were all, seriously? (I’m only guessing that part, but wouldn’t that be your reaction if you were a head monk?) But they gave it a try. And what do you know? The randy monks got all back into their celibacy.

These days, the stone penis and mountainous vagina are seen as fertility symbols. (Go figure, right? I wonder if the extra-holy man saw that coming. (Hehe.)) If a couple wants to conceive, the man stands so the stone penis is in a strategic location, and the woman straddles the stone in front of it. Nine months later…..viola!

There is a fence around the stone penis, but there is a fence pole conveniently missing. Just enough room to slip right in…. (I can’t seem to help myself.) 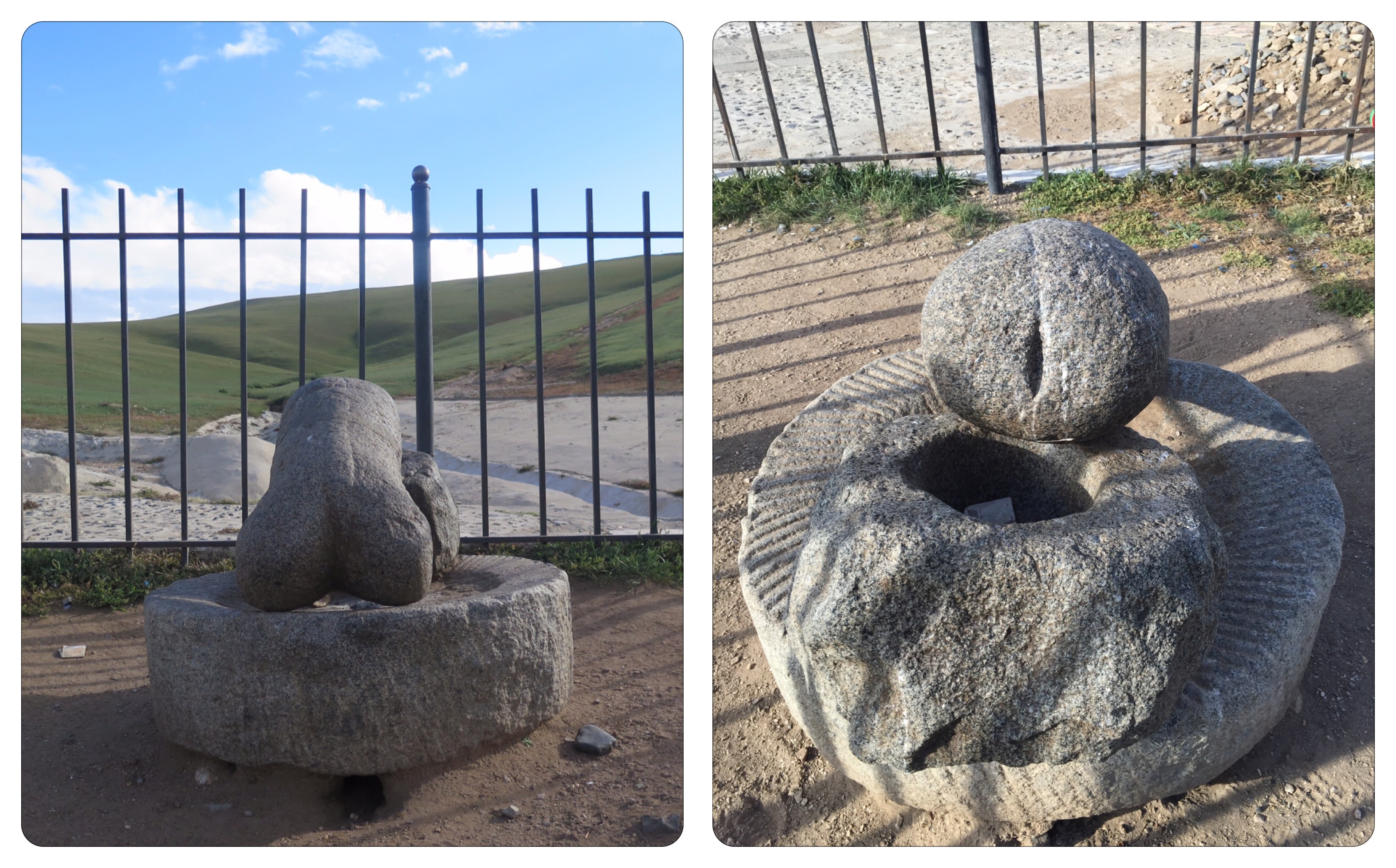 Here you have it, folks. On the left is the penis pointing to its mountainous goal. On the right is the view from the other direction.

After this exciting stop, our arrival at the ger where we would be sleeping that night was rather anticlimactic (snort–but I’m done now). This was a ger that was set up specifically as a guest house, so was no one’s home. The most exciting thing about this ger was the bathroom and shower next door.

The view from the toilet was rather boring, though.

Edited to add: Steve’s post on this day is at My night of wreckage (although it really only deals with the ger).